Groomer Andy’s Rescue Pup: Far From A “Flash” In the Pan

This is the story of Flash, a scrappy, little (10 lb.) dog who was boarding at Downtown Dogs for about six months because his owner’s living situation didn’t allow for dogs. The owner tried and tried but finally told us that he couldn’t make things work and that he needed to surrender Flash. That’s when Andy, our Groomer and Manager at Dog’s Day Out, stepped in. He’d observed Flash’s super easy going temperament and decided he’d be a great dog to adopt. 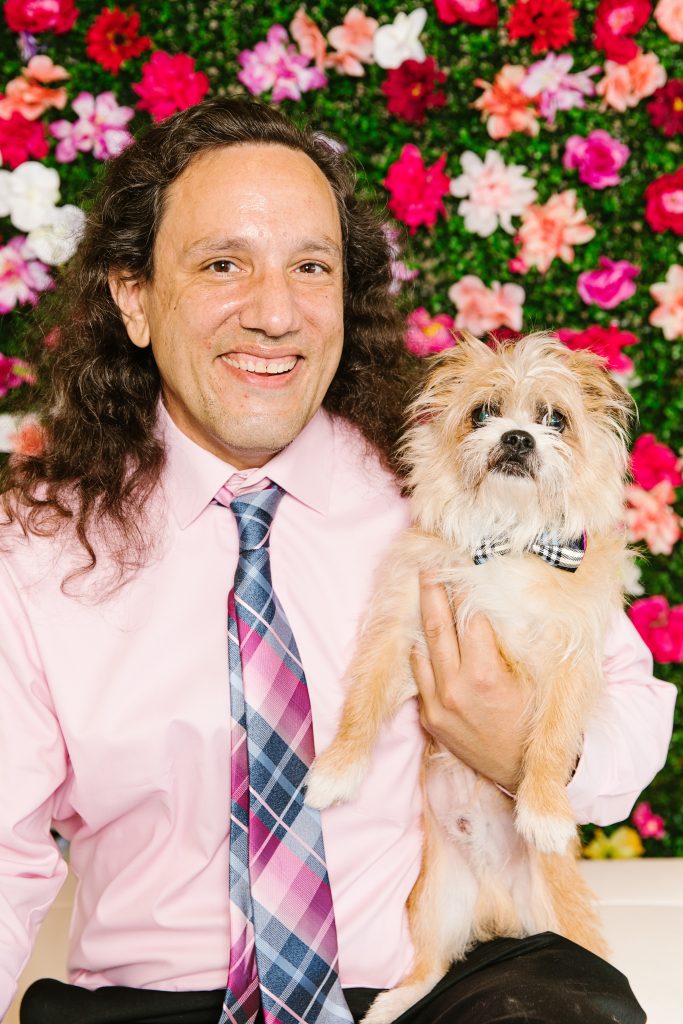 Flash and Andy clicked right away. Downtown Dogs and Dog’s Day Out owner Ralph Bernstein said, “Their easy going, friendly personalities complement each other and they quickly fell into a nice routine. Each day when Andy and Flash walk into Dog’s Day Out, they both look so content and connected. I’m so glad that they found each other, and I know Flash’s original owner was happy his pup was going to someone on our trusted, dog-loving team.”

Like many rescue stories, Andy and Flash’s situation was a beautiful win-win for everyone involved. Here’s what Andy had to say about his Little Buddy Flash.

Do you know what breeds Flash is a mix of?

I don’t. I would guess he is a Brussels Griffon mixed with some sort of terrier.

Can you describe Flash’s personality, likes, and and dislikes?

He’s a bit of a social butterfly. He enjoys meeting new people and new dogs. He doesn’t like to play with other dogs he just likes to be around them. He likes playing tug of war and fetch every once and a while. His favorite toy is a stuffed lamb named Fluffy.

What are your favorite activities to do with Flash?

We’re pretty simple. We like to go on walks around Silverwood Park and take naps. The other day we went kayaking together and I snapped this photo. I think Flash looks quite dapper and nautical in his life vest.

Have you ever owned other pets or other dogs?

Flash accompanies you to work at Dog’s Day Out everyday, but you haven’t cut his hair. Tell us more.

I just love his scruffy look. It fits his personality. I give him a bath at Dog’s Day Out and comb him out about once a month. He’s not a fan of bathing but he loves how he feels afterwards though. He prances around.

Do you have any advice for people considering adopting or rescuing a dog?

Pick a dog breed that fits your lifestyle. Don’t adopt a dog on looks alone.

Is there anything else you want to share about Flash? What do you think he’d like people to know?

If anyone gets him a gift he always wants it to be a bully stick or pig ear.

Andy and Flash are at Dog’s Day Out Thursday-Sunday from 10am-6 pm. Flash chills in the back while Andy and the rest of the team provide full service bathing and grooming. They also help drop-in DIYers giving pups self service baths. Photo credit: @caitlinnightingalephotography